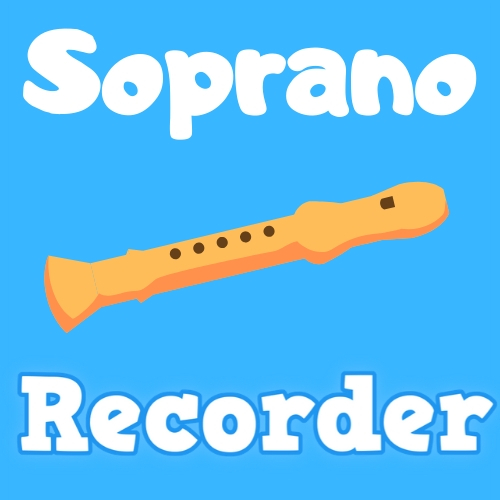 The recorder is a woodwind instrument formed by a cylindrical tube with eight holes, seven of which are located at the front and one at the back.

The sound is produced when the performer blows through the mouthpiece of the instrument bouncing the air against the bezel, while using the fingers to cover and uncover the holes thus obtaining the various musical notes.

This instrument has been known since the Middle Ages, during which time it reached a great popularity that continued throughout the Renaissance and the Baroque.

The first flute was found in Germany 43 000 years old. It fell into disuse in Classicism and Romanticism with the development of the classical orchestra which was populated with more sonorous instruments.

From the twentieth century onwards, it regained relevance as part of the interest in historical interpretations of Renaissance and Baroque music, that is, pieces that were played with the original instruments of the time. Its worldwide diffusion grew thanks to its pedagogical possibilities as a tool for musical initiation.

The most serious instruments of the family have keys that allow to occlude the holes on the recorder.

In the recorder (unlike the transverse flute) it is not possible to vary the mouthpiece by changing the position of the lips, to adapt it to a more or less intense flow of air: therefore, in the recorder variations in air pressure by the performer inevitably produce variations in the height of the note emitted. The expressive effects that can be obtained with the recorder are therefore based on the articulation of the phrasing (the variation of the transient attack of each note, obtained with different “tongue strokes”), on the (sporadic) use of alternative fingering, and on moderate variations in intensity on the individual notes; on the other hand, the possibility of wide variations in intensity (piano and forte) and of crescendo and diminuendo effects on the arc of long sentences is precluded.

On the other hand, the fact that the mouth of the recorder may be very far from the mouth of the player (in longer instruments the air is blown through a brass tube called the twisted one) makes it possible to make very long instruments (and therefore with a very low texture), which is much more problematic for the transverse flutes.

The different construction of the mouthpiece, which differentiates the recorder from the transverse flute, therefore determined so much the great diffusion of the recorder in the Renaissance (a time when the effect of homogeneous sets of instruments that reproduced, thanks to their different sizes, the ensemble of human voices from bass to soprano was greatly appreciated), as well as the subsequent prevalence of the transverse flute towards the end of the eighteenth century (when the dynamic possibilities of the recorder were inadequate to the changing musical needs and the size of concert halls) and finally the massive use of the recorder as a teaching tool in the twentieth century.

Parts of the recorder

Now we’re going to show you the parts of a soprano recorder.

The head, the body and the foot.

Look at the name of the recorder parts in this list. As you will see below, the parts are going to be the same for the soprano, alto and sopranino recorders. 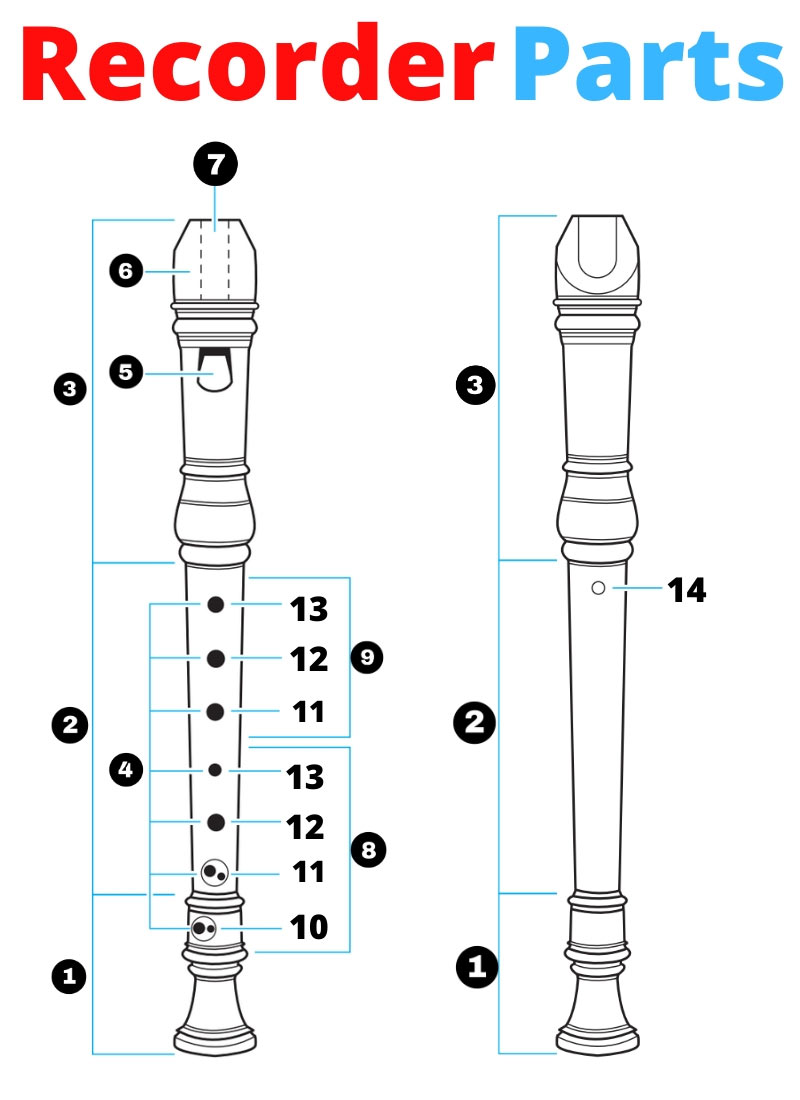 Played by holding the instrument frontally between the lips, unlike the transverse flute which is held horizontally.

For this reason, the recorder is sometimes called the “straight flute”. There are recorder of different lengths: the longer flutes have a lower sound, the shorter ones have a higher sound.

It has a total of eight holes, seven on the front side and one on the back; of the seven front ones, the three upper ones are played with the left hand (the hole on the back side, is closed with the thumb of the left hand, and is used to obtain the notes of the upper octaves) and the four lower ones with the right hand.

The little finger of the left hand and the thumb of the right are not used (the right thumb holds the instrument).

The lower hole is misaligned with respect to the others, in order to be easily reached by the little finger; in the Renaissance flutes, instead of the lower hole, two holes were drilled at the same height, in a symmetrical position, to allow possible use with the hands reversed (the right top, the left bottom): the hole not used was sealed with wax. In the 18th century, to make the intonation of the altered note more precise, the hole was split into two close holes (and the same was done for the hole immediately above), as can be seen in the recorder of modern construction.

Once you have well identified the parts of a soprano recorder you can go on to learn to play the recorder.

In that section you will learn all Soprano recorder fingerings.

Notice how the air enters the recorder and how it behaves, in this picture of a recorder head. 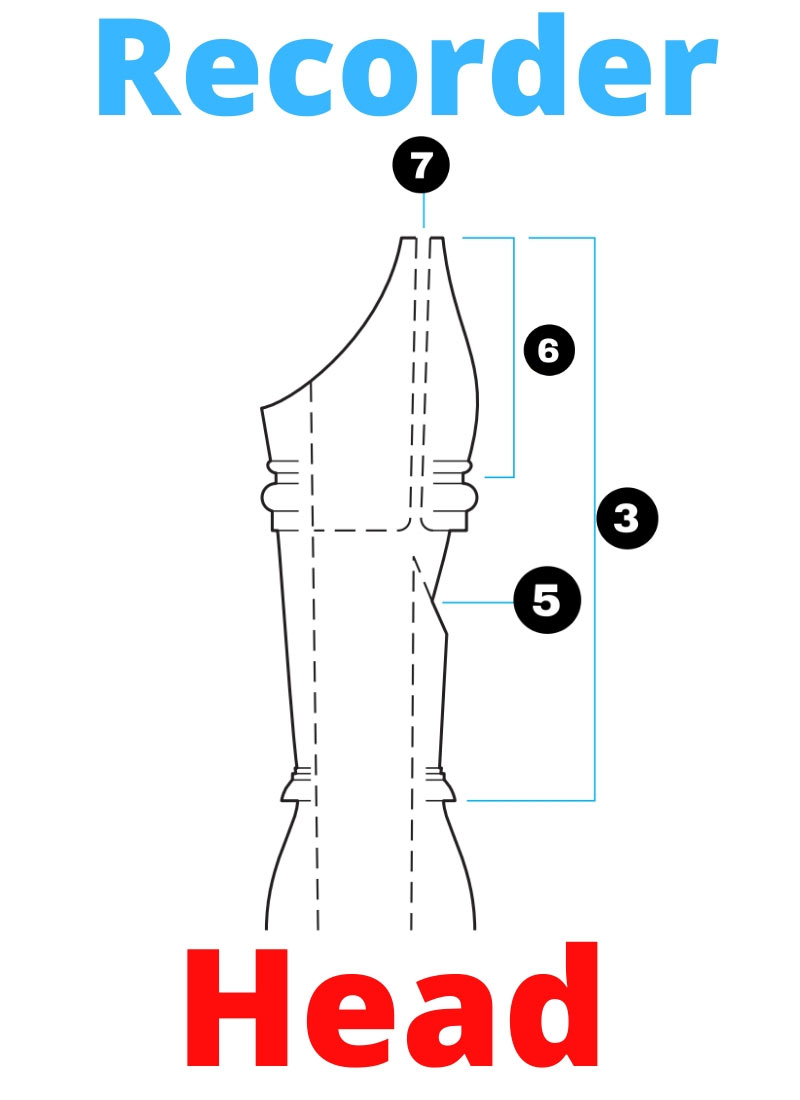 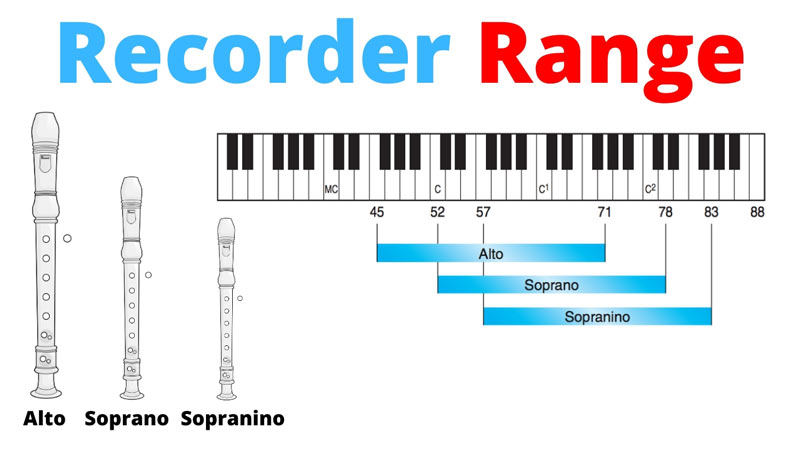 Look at the difference soprano vs alto recorder.

On the other hand, the sopranino recorder starts its range one fifth above the soprano recorder.

You should know, that the soprano recorder sounds and octave higher than is writen.

It is not written in pitch because it would be too high on the stave and a little confusing.

Therefore, remember that you will always be sounding an octave higher than what is written.

For this reason it is usual to put a small 8 in the treble clef.